I often feel, as many other artists that decided to take part in a corporate world, that after a while there's a craving coming from within, a voice calling you to create something awfully personal and noncommercial. I'm not saying that I don't implement art into my commercial work, I always do, that is what gives life to each and every project I am hired to do. But still, it does not fully satisfy the craving inside. We try to ignore it or lie to ourselves that the day will come when we'll have the time just to bring that idea to life, but the day never comes. Well, luckily for me, it came.

I was always a big fan of fairytales and the ones that left the biggest impact on me were Oscar Wilde’s stories known under the title "The Happy Prince and Other Tales" (no, it's not "The Little Prince" by Antoine de Saint-Exupéry, which is also cool but a completely different story).

The idea to illustrate the tales was developing for years. I was looking for a fresh way to present the stories to the contemporary reader, more than 100 years after they were written. I chose the future as the temporal setting for the stories, not just because Wilde himself was a visionary and a man much ahead of his time, but also because each of the stories, timeless as they are, used symbols that were significant for that period, and I just replaced them with contemporary ones. Was it necessary? No, but it was fun to do! 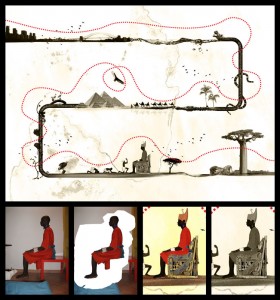 Another fun thing to add was the infographical storytelling. It is an ancient and the initial way to leave a written message which fitted perfectly into my vision, especially for the part of Swallow's narration about his journey through the ancient worlds. The task was vast and time consuming. To give a better picture of what was ahead of me I am showing just one segment of just one tablet of the Swallow's tale. From a room environment photography with improvised costumes (yep, for this one I didn't have my usual corporate budget 🙂 ), through assembling it all together to compose each scene,… it was a long and exhausting process but nonetheless enjoyable.

About the Author // Vlad Strajnic

Graduated from the Academy of Arts in Novi Sad, Serbia. Acquired master degree in visual design from SPD, Milan, Italy. Worked as an art director in NY and Milan. Currently, creative director of Crafty Labs.

Follow this post's comments by subscribing to the Comments RSS feed